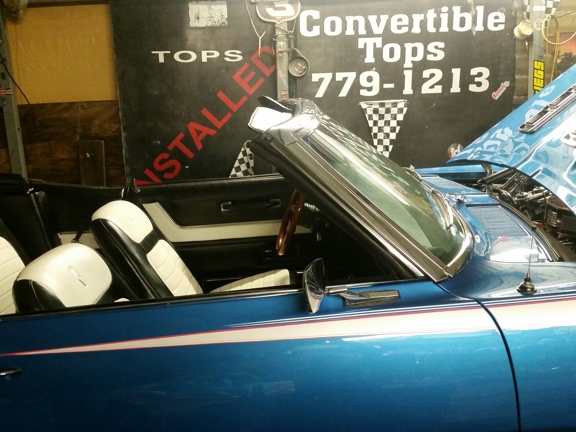 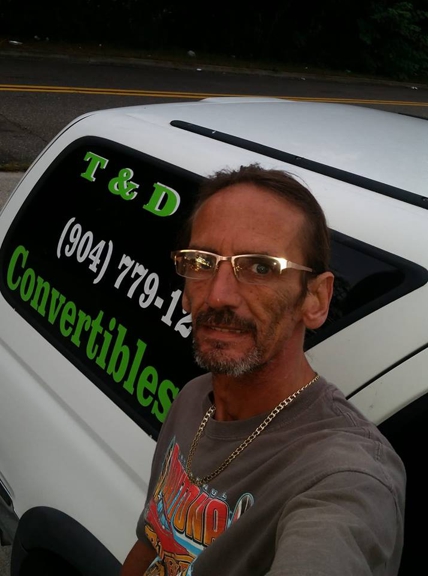 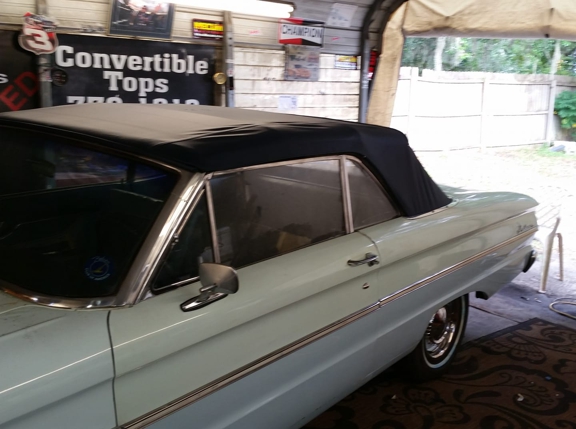 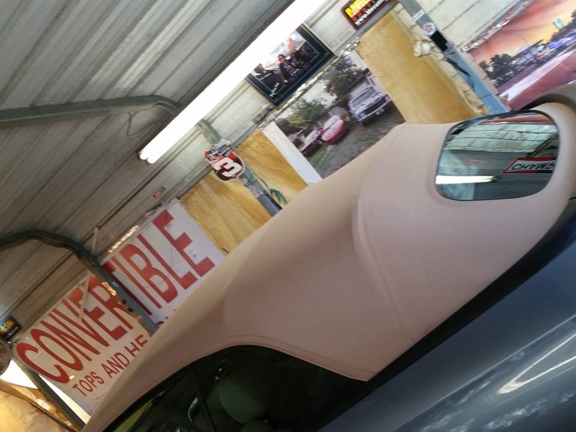 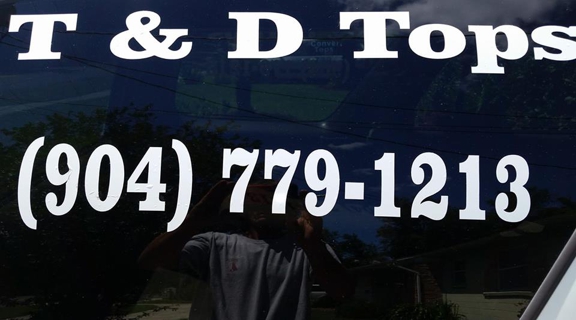 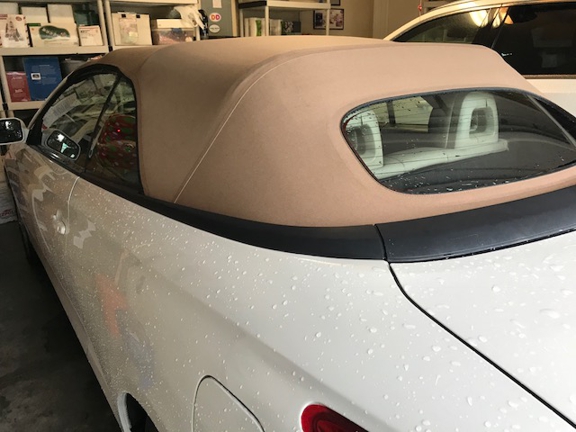 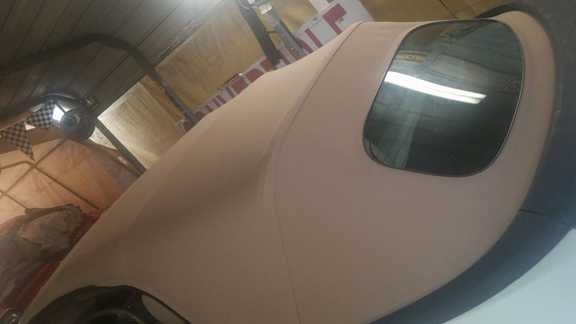 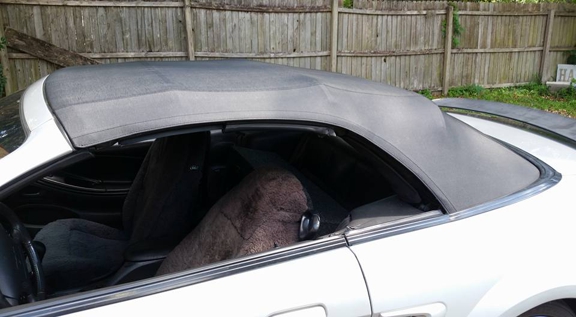 Tim did my 90 mustang top looks great best price in town and very quick to get the job done. Could not have asked for anything more.

Tim has done several tops and head liners for me over 20 years both personal and for my customers always a great job at a fair price love this guy.

Replaced my cobra top. Awesome job at great rates. Thanks Tim. You are number 1!!!!

Tim answered my phone call on Friday evening and put my new top on my Miata Saturday morning. He did a great job. He even showed me some things I was not aware of to make the top and the care itself last longer. Thank you Tim I would come back to you again if I need to have a top put on any other car.

If you don't let Tim replace your top your CRAZY!

He recently replaced my wife's Mustang GT top. He did a great job! He finished when he said he would! He did it for about $300 less than the place we were going to use AND he did a great job!!

You might be saying, "But don't you get what you pay for?" That's right you do. So with Tim you pay for his labor, his years of experience and his knowledge. "But won't the top be "cheap?" He will install any top you want; top of the line or cheapest available. It's your call!

Don't judge a book by its cover! With Tim what you do not pay for is a nice building with a receptionist and a lot of overhead and a huge mark up on the top.

Tim is a car guy! So he cares about doing it right. (I am a Mustang fan, but I appreciate a beautiful car and Tim has a sweet '67 Camaro)

Like I said, If you take it somewhere else your CRAZY!

2000 BMW Z3. Perfect installation and best price in town, definitely would recommend T&D, will forward his business card to my BMW mechanic

Had the top replaced on a 2004 Sebring. Excellent job and the price was Awesome! We've had the car in 2 major rainstorms since having it replaced and no leaks. I recommend T&D to everybody.

I have a 2002 Mitsubishi eclipse that I attempted to put an ez on top on by myself, which didn't turn out so good. But I called t & d and he told me he would show me how I could fix it or he could do it himself my option. He ended up doing it any ways, might've taken an hr and a half to completely take the top back off and put it back on looking better than the factory top I took off myself. Great work for a lot less thAn big shops and a lot faster than everywhere I had been before. Plus he actually talked to me about what all he could do and showed me everything he had done once he put it on. Great shop great deal great work. Thanks man

T & D replaced my 2002 VW Cabrio top and I couldn't be happier. It looks so beautiful that I walk past my own car in the parking lot. I don't recognize it! The service and quality are top notch. Not only were they informative throughout the process, they also provided follow up advice and pointers. With his competitive prices, efficient turnaround time, and superior skills, you'd be crazy to go anywhere else.

We just had the top on our 2002 Ford Mustang replaced by T & D Tops and the service we received was phenomenal. The work was outstanding and Tim was extremely knowledgeable and friendly. My husband called around to several different places and T & D's price was by far better than anyone else's. We will definitely use T & D again if the need arises. We also highly recommend him to anyone in the market for a new top!

I live in Chapel Hill, NC. I drove 7 1/2 hours JUST so Tim from T & D Tops could replace the top of my 2000 Pontiac Firebird. He charged me about half the price of most auto shops that quoted me, but gave better service and quality than any shop would have provided. My dad and I both saw the passion he has for working on cars and the knowledge he has. He said it would take about 5 hours, he was done in 3. You get more than just the service, he gave me a ton of knowledge about convertible tops, how they work, and how to keep them clean and working properly. Another plus, Tim's been working on tops for more than 18 years. It was definitely worth the drive. Highly recommend!!! And I will go back to him when I need another new top in a few years.

I live in Orange Park. I had the top replaced on my 1993 Miata. The service, quality of the product and the quality of the labor was nothing short of 100%. He even repaired a broken door latch on the vehicle and was not going to charge me. I will not hesitate to use him again and I very highly recommend.

I have a Mazda Miata that needed a new top, and after spending hours on the internet looking at prices for the top, and someone to do the work. I settled on T & D Tops after reading the reviews. Tim was polite, knowledgeable, and priced better than any other establishment. I was not disappointed in his work. He did a great job and completed the work the day after receiving the top. The whole process took just a few days. I am very glad that so many people took the time to write a review, as that is why I chose him. So I hope that my review will help someone else to make the same decision. You will not be disappointed.

I drove all the way from St. Augustine to get my Toyota Solara a new top. With a previous car I replaced a top with Davis seat covers in Jax. and I had to bring it back 2 times because the snaps kept breaking off. They were also extremely rude. With this car I decided to try Tim at T & D tops. BEST decision I could've ever made! The top has a lifetime warranty and Tim guarantees his work. The top came out beautiful and I couldnt be happier! His prices are also the best I could find! Great guy! Worth the 1 hour drive!

I have an older Mazda Miata convertible. The rear glass window simply fell out one day. I called around to all of the big stores only to feel as if I was getting a run around, not to mention some were simply rude and I was loosing hope. I finally found Tim at T&D tops. Not only did he replace the top, with one that was much nicer than my original, he charged me about 1/2 the price of his competitors! He also explained in detail as to why the rear window could not just be replaced. His work is thorough, high quality and he really puts the customer first. The only sad part for me is that he specializes in the tops, upholstery and headliners. The reason that it is sad, is I would trust him with everything that would need to be done on my car and you certainly don't find that in most business today. I would highly recommend him!

Merry Christmas to All FROM TIM AT T & D TOPS

T and D Tops provides exceptional quality at extremely reasonable prices. T and D replaced the top on my 2002 VW Cabrio. That happens to be the car I own. If I had an Audi R8 Spyder, a BMW M6, a Mercedes SLS Roadster, or a classic antique convertible that needed a new top, I would not hesitate to take it to T and D! I highly recommend T and D to anyone needing a new top. They are very professional and very business savvy. Overhead is kept to a minimum and the savings are passed on to you, with absolutely no compromise in quality. T and D exceeded all my expectations! (They even removed the duct tape adhesive from my rear seat!) Thanks again!!!

Tim did an AMAZING job on my 1998 VW Cabrio top. He was so thorough and his communication throughout the process was excellent. He was done in half a day, and my car looks great. He is also super friendly and helpful.

T & D provides small town friendly customer service paired with exceptional professional knowledge! We took my daughter's 1990 Miata to Tim to have the top replaced. We had priced at other shops in the area and we were worried that the cost would just be too much. But Tim took care of us like we were family and made it very affordable for her college student budget! The top looks fantastic! His attention to detail yet timely service produces Quality work! Thanks Tim and Bobby! You are the BEST!

I recently purchased a new top for my 1999 mustang online I had planned to install it myself after researching I realized I needed a professional I called T & D for an estimate but didn't think I could afford it after calling around for estimates I found out that T & D 's price was around half what the other guys wanted. I had read the reviews here and heard good things but what really helped me make my decision was when one of the other shops told me that he would personally recommend T & D he told me they do excellent work but have low overhead and pass the savings along to their customers. I had my new top installed yesterday by T & D and it looks great after watching the work they did I am glad I chose a professional .